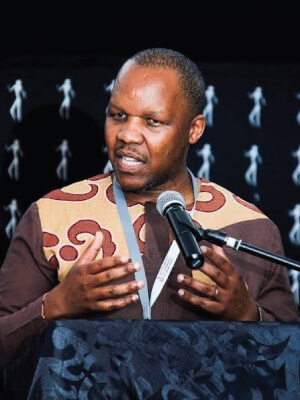 Professor Siphamandla Zondi is a professor at the University of Pretoria. He coordinates the Department’s Institute for Strategic and Political Affairs, which analyses strategic dynamics in national, continental and international affairs including decision-making, leadership, norms, values, and agency. He also oversees the Centre for the Study of Governance Innovation and the Centre for Mediation in Africa. Between 2004 and 2016, he worked first as the head of the Africa programme of the Institute for Global Dialogue associated with Unisa and later as the head of the Institute itself. He was previously employed to lead research on regional integration at the Africa Institute between 2000 and 2003. His intellectual interests lie in the area of Africa's international relations as well as theory building in relation to decolonization and transformation of the modern world and its systems.

His recent published work focused on the diplomacy of common positions at the African Union, decolonising diplomatic theory and practice, south-south agency in global affairs, African voices in international relations and the paradigm of peace and dialogue. Zondi is the co-editor (with Sabelo Ndlovu-Gatsheni) of the recently published book entitled Decolonising the University, its Knowledge and Disciplines (Carolina Press) – available on Amazon. He is the current editor of the journal, Latin American Report, and is on editorial boards of several international journals. He serves on the National Planning Commission of South Africa with a special focus on regional and international partnerships. He is also on the Steering Committee of the Council on International Relations, which advises the Minister of International Relations and Cooperation on international affairs. He was appointed by the Minister of Arts and Culture as one of the Social Cohesion Advocates, promoting dialogue and activities designed to help the nation-building and social cohesion endeavor. He recently submitted a book manuscript on NGOs, Africa and Global Power and is finalizing another on African Agency in World Affairs. He was recently appointed as a mentor in the NIHSS doctoral mentorship programme. He is a passionate mentor of young thought leaders and committed activists in the cause for decolonial diversal futures.